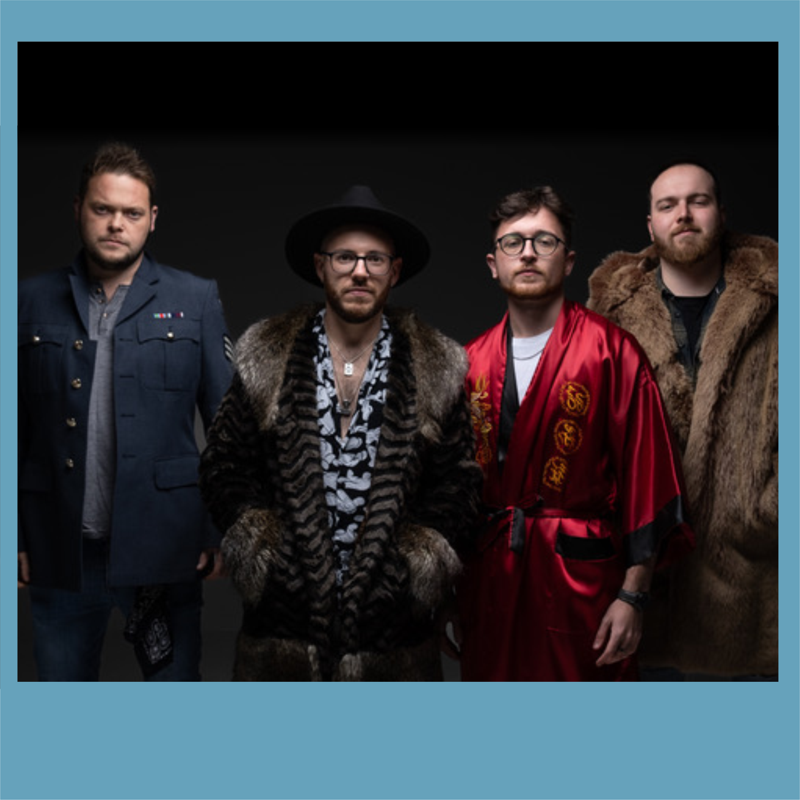 Support from Our Propganda, and Crstian TR.

Skinny Knowledge’s debut album ‘Don’t Turn Out The Lights’ on first listen is pure blood rock n’ roll tinged with punk influences. However, peel back the layers and what you’ll find at the centre is a big middle finger to a society that makes people feel like it’s not okay to not be okay. A society that creates a tormenting image of false pretence that kicks us when we’re down, rather than helping us back up. In a world full of tainted phone screens and technology, the songs presented on ‘Don’t Turn Out The Lights’ believe there’s a place inside of all of us that’s searching for some form of realism. This is honest rock n’ roll in every essence. Thundering drums, roaring guitars, and a voice with something to say.

It’s a potent message but in order to reach that potency, the idea could only come from hard times and difficult knocks. When you reach the bottom, the only way is up…

Flashback to 2019 and band founder Andy L Smooth’s vision and conviction in music was nowhere to be seen. His experience as a drummer in various bands, coupled with music business pitfalls that many musicians fall foul had got the best of him. “I felt completely lost. My relationship with music had become stale, nothing excited me, I was filled with a sense of dismay and despair… I dreaded what I once utterly loved”, says Smooth.

Without any intention, or forward planning, Andy decided he needed to face his demons and began writing his own music and recorded demos in his home studio. It was a big step that included serious self criticism and an inwards reflection as to what truly made Smooth tick. The answer? Songs.

It was a lightbulb moment for Smooth, undeniably cathartic in every sense. “It gave me a feeling that I hadn’t felt for a very long time, or for that matter, EVER. I completely and utterly fell in love with music all over again. I became like a little excitable kid that’s just ridden a roller coaster for the very first time. It was at that point, that I knew I had to fully commit to the process and share this music.”

What followed was something that can only be described as an exercise in conviction. Smooth continued the critical process, developing the genesis and wrote more songs and honed his lyric writing to reflect more inwards and the way he saw the modern world.

Determined to bring his new songs to life, he juggled the challenges of lockdown by working with renowned producer Lewis Johns (Employed To Serve, Loathe, Conjurer) at the Ranch studios in Southampton. Between the two creatives, Skinny Knowledge’s debut album was born. With Smooth playing all instruments on the album, ‘Don’t Turn Out The Lights’ was soon recorded, produced, mixed, mastered and ready to go. The result is a collection of music that delivers on the promise of Smooth’s demos which gave him cause to seriously consider how far he wanted to take his vision.

“Whilst the album was coming together in the studio, I realised that I wanted a band. I NEEDED a band. I’ve been the drummer in all my previous groups, but this time, I needed to be stood at the front, screaming these songs out to people, like me. People that care. People that have an emotional connection with the music. I finally had something important to say, and I don’t want to pass up that opportunity.”

Affirmation is a powerful tool in a creative artists tool kit, something Andy L Smooth stands by. Coupled with experience, Smooth has brought together a group of musicians that have all performed music together previously and collectively share THE vision that’s always been there.

“We’re ready to scream our way into this world with this album”, he concludes.

Don’t turn out the lights? When it comes to the power of inspiration and creativity, Skinny Knowledge keeps the lights glowing bright.